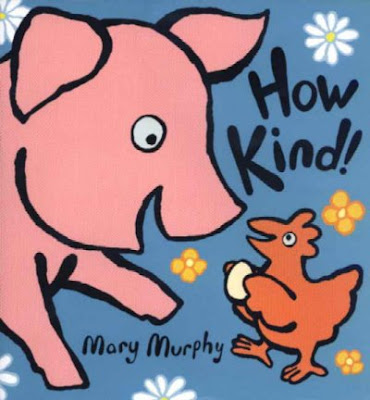 Mary Murphy's picture books are filled with bright, colorful illustrations - perfect for toddlers! The story is so simple and easy to understand. The characters are familar - there's hen, pig, rabbit, cow, cat, dog, and the egg, which turns into a chick. Best of all, the book's pay-it-forward theme encourages children to be kind and do nice things for other people!

I was going to read this book to the toddlers in my storytime as it is, but then I discovered its potential as a simple felt story, so I decided to go for it and transfer the magic of Murphy's book to felt!

Here is the final product: 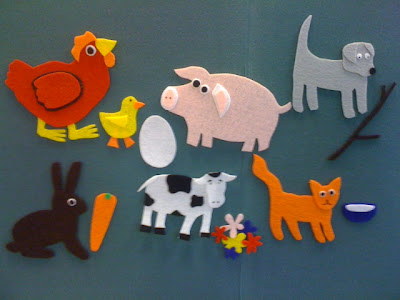 How Kind!
A felt story based on the book by Mary Murphy

HEN gave PIG an EGG.
“How kind!” said PIG.
PIG kept the egg safe and warm.
“HEN is so kind,” he thought. “I would like to do something kind too.”

PIG gave RABBIT a CARROT.
“This is for you,” said PIG.
“How kind!” said RABBIT.
“PIG is so kind,” thought RABBIT. “I will do something kind too.”
He picked some flowers.

“These flowers are for you, COW,” said RABBIT.
“How kind!” said COW.
“RABBIT is very kind, thought COW. “How can I be kind too?”

She looked for DOG.
“Let’s play your favorite game, DOG,” said CAT.
“How kind!” said DOG.
They chased around…and around.
“CAT is so kind,” thought DOG. “I want to be kind too.”

DOG fetched a stick. He scratched PIG’s back. [this gets a lot of laughs!]
“How kind!” said PIG. “Would you like to see my egg, DOG?”
PIG showed where he was keeping the egg. But the egg was gone!
In its place was a CHICK.
“Hello you pretty little chick!” said PIG and DOG.

They brought the chick back to Hen and Hen said, “How kind!”
Posted by Jeanie at 4:04 PM